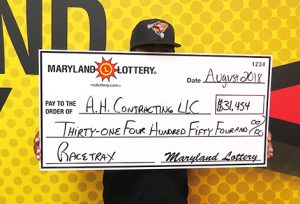 A Baltimore home improvement contractor saw his Racetrax luck change dramatically when he switched his bet type and the clerk added a dose of Lottery luck. He won $31,454!

The hard-working father of three, who owns A.H. Contracting LLC, visited his favorite Lottery retailer less than two hours after dawn on Aug. 10. The 40-year-old studies Racetrax results and realized the Nos. 10, 11 and 12 horses hadn’t won recently. And Mr. “A.H. Contracting,” as he dubbed himself for Lottery publicity, had a feeling that a prize was coming his way.

Instead of placing a Quinella bet — that two or more horses would finish in first and second place, in any order — he bought a 10-draw Trifecta ticket, picking the 12, 11 and 10 horses to finish first, second and third in that exact order. He stepped up to buy the ticket at Liberty Sunoco in Baltimore, and that’s when the store employee enlisted the help of Lady Luck.

“The clerk said, ‘You spend a lot of money here’ and blew on the ticket and said ‘This is the one,’” “A.H. Contracting” recalled. He took the lucky ticket and left Liberty Sunoco, heading to a diner to eat breakfast before work. Only after he finished his meal did he check the race results on his smartphone and discover that the second race out of the 10 on his ticket made him a big winner.

“I was a little shaky,” he admitted. “I paid for my food and the food for the guy behind me.” He also returned to Liberty Sunoco and gave the clerk a tip!

The Baltimore resident said he plans to invest his prize in his company and in his wife’s company. The clerk isn’t the only person at Liberty Sunoco to benefit from the big win. The Lottery will give the Baltimore County retailer located at 5900 Liberty Road a bonus of $314.54 — equal to 1 percent of the prize — for selling a winning Racetrax ticket valued at $10,000 or more.