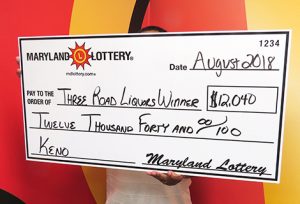 This Brandywine resident switched Lottery games from Racetrax to Keno and found his big win.

A Brandywine Racetrax fan is smiling all the way to the bank after deciding to play Keno on a whim and winning $12,040!

The father of four, who rarely plays Keno, decided to try his luck with a 5-spot bet after seeing the same five numbers appear in the results of numerous Keno drawings. “I locked in on these five numbers months ago,” he said, adding that 10, 13, 23, 36 and 38 showed up in game after game that he happened to watch.

The information technology specialist was home on a Thursday night, watching a preseason football game on TV, when he thought about those five Keno numbers. He had no idea the Maryland Lottery has a Keno promotion in progress through Sept. 9 that doubles and triples winners’ prizes on designated tickets.

“Something said to go play those numbers,” said the 59-year-old. “It was one of those whim things.”

He headed to Three Road Liquors in Brandywine. After placing a five-draw, 5-spot bet with the Super Bonus multiplier feature, he spotted the store owner and went over to talk with her. The lucky player, who dubbed himself “Three Road Liquors Winner” for Lottery publicity, didn’t even notice that his ticket printed out with a congratulations message, saying any prize won would be doubled.

“I happened to glance up when the numbers started and saw the first three come up,” he said. “I didn’t want to jinx it, so I turned around and kept talking to her until the games were over.”

A quick check of his ticket showed he hit all five numbers in one game and several numbers in other games. The Super Bonus prize multipliers combined with the Keno promotion Doubler boosted the prize total on his ticket to $12,040.

The happy granddad of four plans to pay bills with his prize.