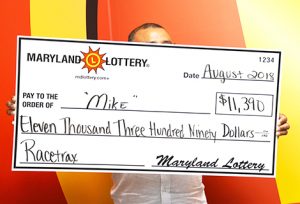 Gaithersburg Racetrax fan “Mike” is on track to defray the cost of a possible destination wedding for his daughter, thanks to his $11,390 prize.

Though he plays Racetrax regularly, big winner “Mike” of Gaithersburg has an unusual process for playing the simulated horse-racing game: he doesn’t watch.

“I put the bet in and walk away,” he told Maryland Lottery officials when he cashed in his $11,390 winning ticket. This strategy has worked for him for two big payoffs; he won about $14,000 several years ago. On Aug. 5, he placed bets at Derwood Beer & Wine in Derwood on a series of races and moved on to other errands. When he returned to check his tickets, the lucky Montgomery County man found that a $1 Trifecta Box bet on horses 4, 5 and 6 was a major prize winner. He added the Bonus option to his ticket, and the 10X Bonus for his winning race multiplied his base prize of $1,139 to $11,390.

“Mike,” as he called himself for his Lottery publicity, reports having no immediate plans for the proceeds. He plans to put the windfall into his savings account. A celebration will be in order, he said, only after he wins big in Powerball or Mega Millions, which are the only two Maryland Lottery games he plays other than Racetrax. The recent Racetrax winnings, meanwhile, will be available to defray the expenses of a destination wedding for his daughter.

“I hope she never needs it,” Mike said, cracking a big smile.

For selling the winning ticket, Derwood Beer & Wine at 17601 Redland Road in the Montgomery County community of Derwood, also benefits. The Lottery retailer earns a bonus from the Lottery equal to 1 percent of the winning amount ($113.90).