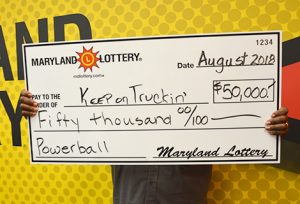 A dump truck driver by profession, the 65-year-old winner plans to use some of the proceeds from his prize in the Aug. 11 drawing to pay off the loan on his pickup truck. “Keen on Truckin’” also plans to provide a substantial, though belated, wedding gift to his daughter. A dozen years ago, he gave her away in the ceremony but lacked funds to give her a gift he considered appropriate.

“She said, ‘Don’t worry about it, Daddy,’ ” the happy winner said, recalling the wedding day. “She’s a wonderful girl.”

“Keep on Truckin’ ” was at Mike’s Corner Store at 163 Main Street in Preston buying new Lottery tickets and checking others from previous drawings when he realized he had won big.

“It was like ‘Sanford and Son.’ I grabbed my heart like I was having a heart attack!” he said with a wide smile. In the iconic 1970s TV show, Fred Sandford, played by pioneering comic Redd Foxx, would grab his chest with one hand and stagger backwards when confronted with surprising news.

The Dorchester County man is a loyal player; he enjoys playing draw games like Powerballand the daily numbers games, as well as scratch-offs.

“I don’t drink very often. I don’t smoke. It’s a little hobby I enjoy,” he said. “Keep on Truckin’ ” notes, again flashing a smile, that his wife’s comment on the Powerball hit was: “That’s good for us!”

This lucky trucker won one of Maryland’s two $50,000 prizes in the Aug. 11 drawing, which saw the $245.6 million jackpot claimed by a New Yorker. The Powerball jackpot began rolling after the Aug. 15 drawing and reached $70 million for the Saturday, Aug. 25 drawing. The cash option is $42.2 million.