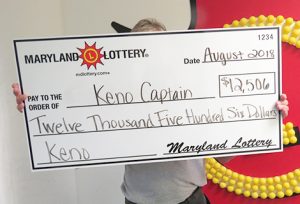 A military veteran from Mechanicsville who is enjoying boating and playing Keno in retirement set course to win the largest Keno prize of his life and arrived — $12,506 richer — at his destination. The lucky man found Lottery luck by changing from a 5-spot to a 7-spot bet and switching one of his numbers from 9 to 8 at the last minute.

“Keno Captain,” as he dubbed himself for his big Lottery win, has played his game of choice for more than a decade in hopes of setting a new personal record. The federal government retiree won $200 the first time he ever played.

His good fortune occurred the day “Keno Captain” and his wife dined at Tequila Grill & Cantina in Charlotte Hall. “Keno Captain” routinely places a 5-spot Keno bet for 10 rounds and adds the Super Bonus multiplier feature. He also plays a set of lucky numbers that include those of his favorite baseball players.

Changing his game paid off! The St. Mary’s County resident happened to read about Kenopayouts on his lucky day and realized a winning 7-spot bet ($2,500) pays far more than a 5-spot bet ($300). After selecting his five lucky numbers, “Keno Captain” asked his wife (aka “The Admiral”) for two extra numbers to fill out the bet.

“She gave me 19 and 20,” he said. Superstitious about how the numbers 9 and 19 appear one over the other on a Keno monitor, the “Keno Captain” changed his lucky 9 to an 8 on the bet slip. He added the Super Bonus multiplier feature to all 10 games. “The very first game won,” he said. “I was thinking, ‘Holy mackerel!’ ”

The happy Southern Maryland resident is keeping his big win and his plans for it a secret. The St. Mary’s County restaurant also shares in the fun by earning a $125 bonus from the Lottery. The Lottery awards a bonus equal to 1 percent of the prize to retailers that sell a winning Keno ticket of $10,000 or more.