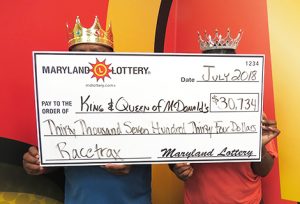 The “King & Queen of McDonald’s” are celebrating their royal Racetrax win.

A Baltimore couple who enjoy playing rounds of Racetrax together walked hand-in-hand through Maryland Lottery headquarters after claiming a $30,734 prize on the computer-animated horse racing game.

The pair plays Racetrax regularly at Edgewood Amoco BP in Edgewood, which is the home of their lucky win and a McDonald’s restaurant. Lottery luck found them there on July 27, after the “King and Queen of McDonald’s” — as they dubbed themselves — played a series of games. The Queen confesses that she bets according to her King’s suggestions.

“I just went along for the ride,” she said, smiling. Her noble steeds took heed and rode across the finish line together.

The grandmother of one and mother of three is a federal government employee, while her King is a professional driver and grandfather of three. They plan to put their royal prize in the bank to enjoy later.

Their lucky Lottery retailer, which they call the “Little Edgewood Casino” because so many players have won there, also shares in the fun. For selling a winning Racetrax ticket valued at more than $10,000, the business earns a bonus of $307.34 from the Lottery – equal to 1 percent of the prize.