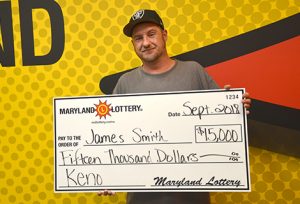 A couple from Mt. Joy, Pa., decided to celebrate their time together over the Labor Day weekend with a trip to the beach and ended up making a Maryland Lottery memory, thanks to a $15,000 Keno win.

“We’ve been together for 10 years and never did anything to celebrate so we decided to go to Ocean City,” said James Smith. They had planned a low-key, one-night getaway from the couple’s home near Lancaster, Pa. The trip involved spending a few hours on the Boardwalk, taking in the sights and sounds of the Atlantic.

Those plans changed when they stopped in the Brass Balls Saloon at 1105 North Boardwalk and started playing Keno. James put $10 on one drawing for a 6-spot bet and added the Bonus multiplier. He picked the numbers 8, 13, 25, 42, 47 and 74 without having any particular reason for the selection.

“I just filled in the ticket,” he recalled.

When the numbers flashed on the Keno monitor, he knew he had won but wasn’t sure how much. The 40-year-old thought his prize was relatively small and asked the cashier to check the ticket.

The Pennsylvania resident is a loyal scratch-off player in the Keystone State, and his wife enjoys playing Mega Millions and Powerball. Keno is a relatively new game there and he hasn’t played it in his home state yet.

The winnings from his score in Ocean City, while not life changing, will make it possible to take a longer family beach vacation this fall, James said. He and his wife plan to bring three of their four daughters (the fourth will be out of state and unable to attend) to the ocean.

Also getting lucky, thanks to James’ Keno score, is the Brass Balls Saloon. The Worcester County establishment earns a bonus of $150 from the Lottery for selling a winning Kenoticket of $10,000 or more. The bonus is equal to 1 percent of the winning total.